The agreement for the build-operate-transfer (BOT) concession was signed on March 4 by the Department of Planning and Investment, on behalf of Vientiane authorities and the company.

Director of the Vientiane Planning and Investment Department, Mr Phoukhong Bannavong, said the city is facing increasing traffic congestion and this problem is expected to continue. To ease the situation, authorities in Vientiane have finalized certain projects in their socio-economic development plan. The Vientiane Expressway No 1 is one of these priority projects.

To achieve this goal, the authorities sought quality investors with good financial status to implement the project. They allowed Asia Investment, Development and Construction Sole Co Ltd (AIDC), a domestic firm, and China’s Norinco Company to carry out project surveys and designs. In this regard, a Memorandum of Understanding was signed by the authorities and the companies on July 12, 2016. They completed their surveys within two years,

The Prime Minister’s Office issued a statement to the Vientiane authorities on February 7, 2019, allowing them to sign a BOT concession agreement with Vientiane Expressway Number 1 Sole Company Ltd.

The authorities said the expressway would benefit the economy and society. The project cost is US$200 million, with a concession period of 50 years. This period can be extended by the developer for 20 years.

Mr Pheutsapha, who is also the Director of the Vientiane Expressway Number 1 Sole Company Ltd, said “In the past, our two firms contributed to developments in many areas of Laos, especially in Vientiane, the capital city. We recently completed the waterpipe installation project. For the expressway project, our company was selected through a bidding process in which many companies participated.”

The signing ceremony, held at the Lao Plaza Hotel in Vientiane on March 3, was attended by the Vientiane Mayor, Dr Sinlavong Khoutphaythoun, Minister of Planning and Investment, Dr Souphanh Keomixay, Minister of Labour and Social Welfare, Dr Khampheng Saysompheng, and other guests

AIDC Trading and its business partner in China. 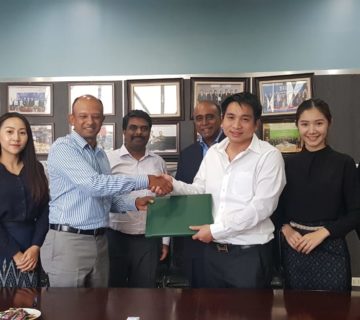 The signing ceremony of the cooperation agreement on October 17, 2019. 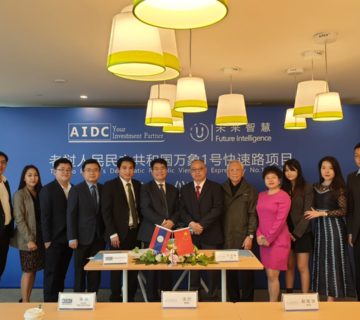 The signing ceremony of the cooperation agreement